hooray for an extra leaf & a card table

It may be because it was such a big undertaking, but it’s taken me this long to write about a massive Russian feast I prepared in January (!) this year for a tiny group of old friends. Although there were only 9 of us at the table, after several days of recipe selection, ingredient planning and considerations for how to set the table, followed by a day and a half of cooking, followed by another half day of cleaning and dish washing… I’m not doing another one of these all on my own for a long long while. Which is not to say that it wasn’t amazing. I enjoyed looking through my cookbooks and various websites for recipes, which is how I found this fantastic culinary video-blog, although it is entirely in Russian and may be tricky to navigate for some of you. Shopping for fancy dishes at thrift stores and figuring out place settings was oddly fun. It was when it came time to cooking and the minutes were ticking away that I found myself sweaty from more than just the heat in the kitchen. 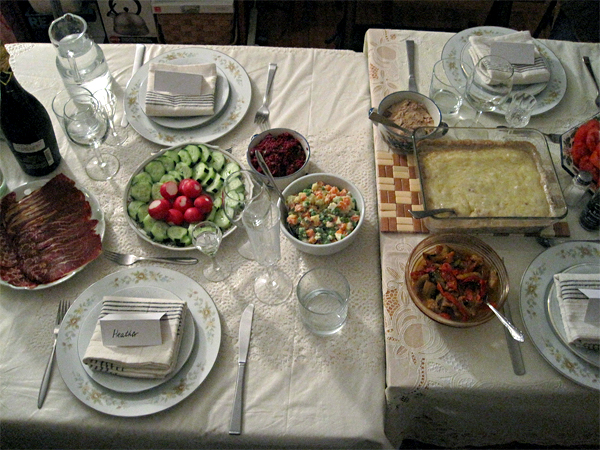 the table spread, prior to being happily decimated

In my zeal to get everything done and crossed off, I threw away all the index cards on which I’d written out each individual recipe. The notebook from which I worked for the menu also seems to be missing. The menu below is accurate, but I will have to forage a bit to find the recipes for sharing. If you see something you’d like to know more about, comment and I’ll be sure to put up the information. I will be highlighting some of the recipes in a separate post. 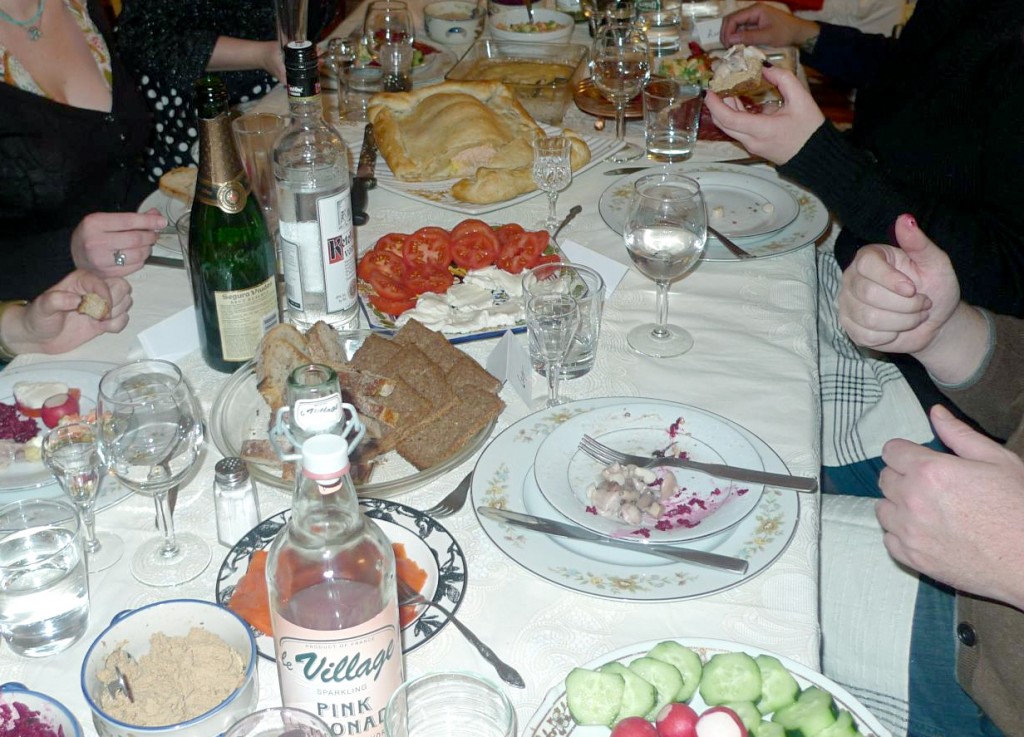 The menu was a mix of Russian staples, like chicken liver pate, salad Olivier, salmon in the puff pastry and mushroom julienne, combined with dishes familiar to me because of having my dad’s side of the family be from Azerbaijan (I was born there and lived there for 5 years). Stuff like kabobs, the beet salad and chicken in pomegranate sauce are not exactly Azerbaijani dishes, but they are an example of how my family often cooks.

None of my guests in attendance were vegetarians, or at least they weren’t at the time of my dinner, so the entrees were pretty meat heavy. I tried to offset that by serving a lighter version of the salad Olivier, which usually has meat chopped into it, and the dill rice was a subtle side dish to highlight the flavors of the hot entrees. According to my friends, I done good. Probably the most popular items from the evening were the “cheesy mushroom thingy” and the lamb kabobs. 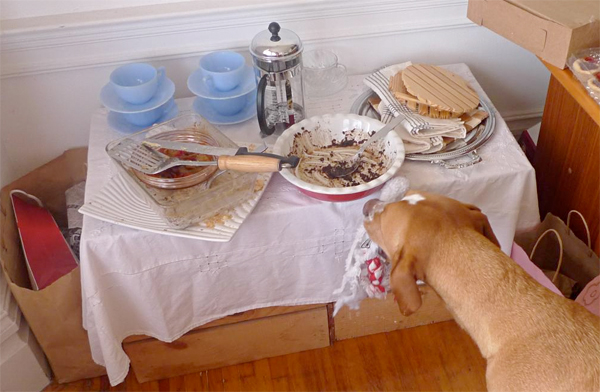 my roommate’s dog investigates some of the wreckage

I did absolutely NO cleaning that evening, because not only was I tired but most of us also consumed a fair amount of champagne and vodka. There was quite a bit of giggling, toasting and teetering. The following morning I spent about 3 hours sweeping, wiping down surfaces, disposing of food scraps, washing and drying dishes, and reorganizing my left-overs in the fridge (oh yes, I had a lot of delicious left-overs to feed me for the next three days).

What can be learned from this? Well, for starters: don’t ever do something like this again all by yourself. Believe it or not, the final menu was actually the result of me scrapping a couple extra side dishes. And there were a few glitches, like the puff pastry on the salmon kulebyaka not cooking through all the way, and the “cheesy mushroom thingy” was a bit more gooey than I’d realized.

I found it very helpful to write out all the recipes I was going to prepare on index cards, with ingredients and measurements on one side and step by step instructions on the other. This helped during cooking, but also was useful when I was preparing my grocery list, allowing me to find overlaps in ingredients and to quickly adjust quantities of what I’d need to purchase. It was also really satisfying to tear each index card into pieces as I finished preparing each dish. On the financial tip, it was actually surprising how much less than anticipated that I spent on all the ingredients to make a 3-course meal for 9 people. In fact, all the dishes and stemware I ended up buying at Goodwill probably cost more. I had just filed my taxes early and received my Federal refund, so I kind of wasn’t thinking. I am sure that I could have been even more penny-wise if I was carefully counting. But who cares! It was so worth it.

It’s also helpful to have a couple of friends show up early by promising them the chance to be the first to taste dishes as they come out of the kitchen, in exchange for their help setting the table and chopping things.

So, all in all, it was a very successful meal. A lot of hard work that paid off in an evening of 5 hours of eating, drinking and laughing with good friends. And I think I appeased the culinary gods to last me a full year (plus my parents were really proud of me). crumbs & an empty Underberg bottle? an emblem of a successful dinner